This week, we are adding a Trading Pit Market Experiment, a la Vernon Smith, including price ceilings and price floors, and unit taxes.

The experiment is based on this guide (written by Antonio Cabrales for the coreecon manual). An extended version, including several countries and international traders will be introduced in a few weeks. 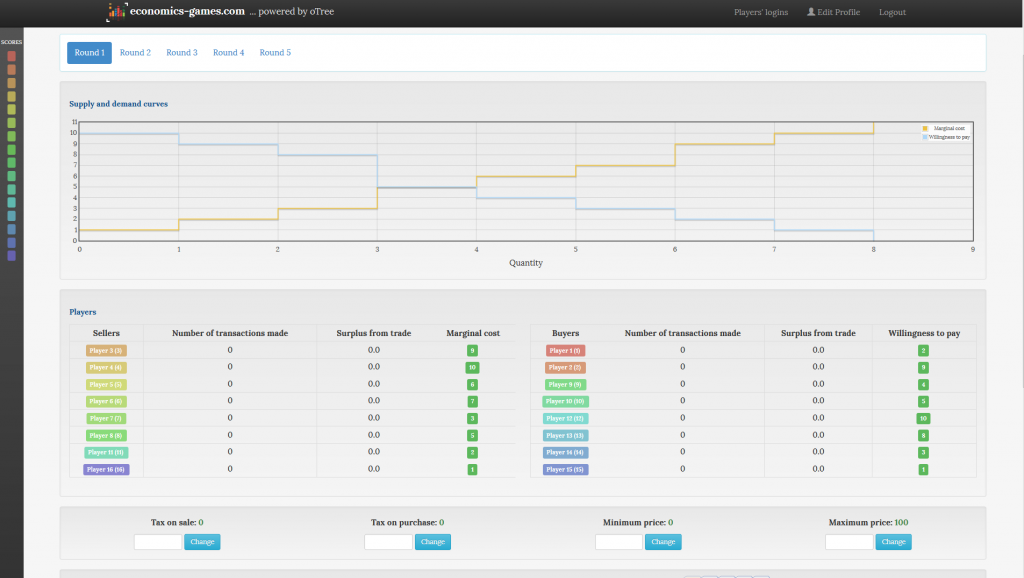 First page of the guide of the experiment (A. Cabrales for coreecon):

“This experiment is used to introduce students to the working of competitive markets. As The Economy explains in more detail in unit 8, the experiment was first run in 1948 by Edward Chamberlin, whose results were quite different from what equilibrium theory would predict. Later, at the beginning of the 1960’s, Vernon Smith reran the experiments with two key innovations: firstly the prices of agreed trades were made public, the second was to repeat the game several times, with the participants keeping the same valuation in each round. Both the design of the history and the experiment serve various pedagogical objectives, which we now discuss.

The game should ideally be played before the theory about markets is introduced, to avoid the risk that knowing the theory might affect how some students play. It can be played in quite large groups (at University College London and Universitat Pompeu Fabra groups of 300-400 students have played it successfully), but it works in groups as small as a dozen people (as in Universidad Carlos III)…”